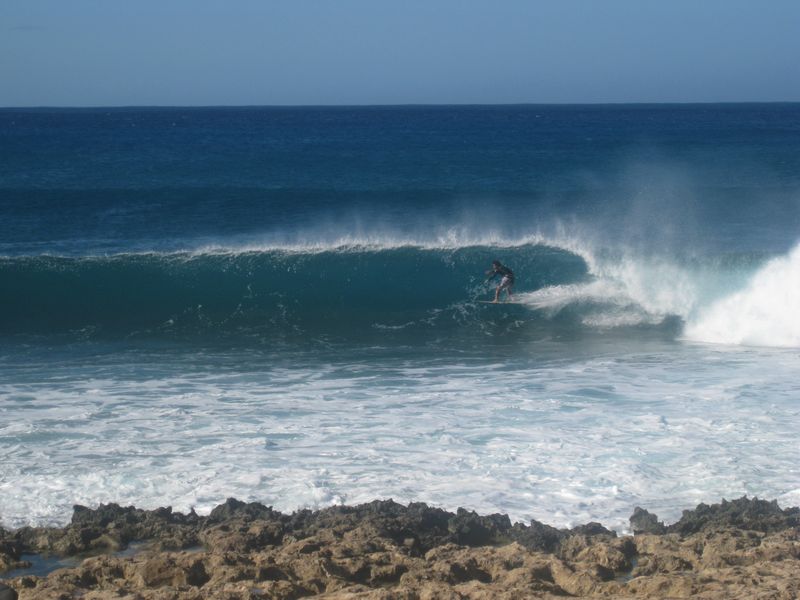 Check this out some interesting beginnings to our beloved sport and art form of Surfing in the Hawaiian Islands.

Despite that surfing is Hawaii’s most well known sport, nobody really knows its true origins. The Hawaiian people call surfing he’enalu. Europeans were not exposed to surfing until 1767 in Tahiti.
It is clear that surfing already existed in Polynesian tradition thousands of years before European contact, which can be seen from cave drawings and artifacts that date back 3,000 years. It is certain that the people of Tonga, Tahiti, and Samoa surfed within that time period and it is very likely that indigenous people throughout the South Pacific also participated in surfing.
The ancient Hawaiian people viewed surfing as a well-respected art form, not just a sport. The Hawaiian people feared the powerful seas and asked their gods for strength before starting to surf.
In those times, it was the chief who would ride the best board made from the best tree. A commoner could not surf with the chief or upper class unless he was an incredibly good surfer.
It was a challenge to steer the surfboards of this time since they lacked fins. In the early 19th century, European missionaries came and prohibited traditional Polynesian practices including surfing.
During of the 19th century, surfing’s presence in Hawaii decreased significantly. Noticing the fading tradition, the Hawaiians tried to revive it in Waikiki. One of the first literary mentions of surfing was in Jack London’s book “A Royal Sport: Surfing in Waikiki.” Surfing’s popularity really took flight once it made its way to the United States and Australia. George Freeth, a Hawaiian surfer, is recognized as the first man to surf the waves in California in 1908. The surfing culture became popular in the fifties and sixties as people were attracted to it by related music. Many professional competitions still in existence today made their premieres at this time. The surf culture has taken over many beach areas. Surf shops and can be found all over the world. Modern boards hardly are similar to the boards from ancient Hawaii. Instead of being sculpted from a piece of wood, boards are hollow with interior ribs for support. Even though this hollow board floated well, it did not facilitate control.
Board designers altered the board in the 30s and 40s by simply attaching a fin and other parts to make it easier to maneuver. Hawaii is a surf paradise. People around the world know that if they want to find excellent surfing, they will find it in Hawaii. The best surfers ride the waves in Hawaii, because not only are the beaches beautiful, but also it offers excellent surf conditions.

Here is a perfect wave from the West side of Oahu that locals Love!